If there is one group in K-pop guaranteed to release a good album, it would be Brown Eyed Girls. Their fifth album, Black Box, is no different: it’s as solid as solid albums get.

I don’t really know if I can do justice to veterans like BEG via a review, because their approach to music is so different from traditional K-pop, and yet they are also not anywhere near the indie scene. In simple terms, they make mainstream music designed to exemplify vocal and musical talent within the group. Achieving  a sense of artistry in pop music presentation is a clear modus operandi for the group, and one that I feel somewhat under-qualified to expound upon. (May I rue the day I decided to forgo ever thinking about taking my music education seriously.)

But unlike “Sixth Sense,” there lacks a clear wow factor in Black Box and “Kill Bill” that sets BEG apart from the pack this time around (ignoring the ever awesome MV). The song is a straightforward pop piece that’s effortlessly executed and free of grime. Does that cleanliness and nonchalance lend itself to the “artistry” that made the bane of BEG’s existence? Maybe, I really don’t know as of yet. I don’t discredit the importance of effortlessness in music (I have harped on it extensively here), but I do feel that simplicity (despite my recent thoughts on F(x)’s “Shadow”) can only take a song so far before minimalism becomes nothing…empty…uninspired. For a group that has become famous for its more ornate musical performances, “Kill Bill” comes a little short song-wise.

Overall, Black Box doesn’t improve much upon “Kill Bill,” or strive to make itself an anomaly amongst the rest of K-pop. The development within the album is next to none (in context of my sky high expectations), and the base quality of the album tracks feels a little half-hearted with the perspective of BEG’s previous works. Clean and solid is fine, but impressionable music is what is important in the end. Small mistakes here and there are forgiven if the holistic album has clear direction and purpose, an end goal, or even fragments of a journey. Black Box is weak on much of that, leaving the listener as a half aware zombie rather than an active music consumer. 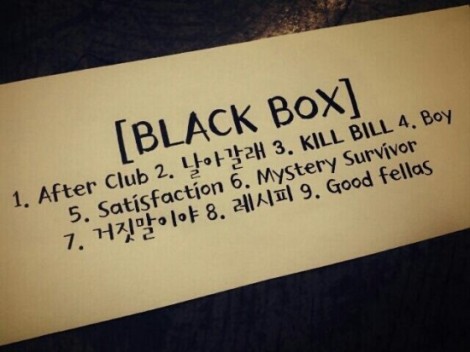 Despite my rather somber sentiments towards Black Box as a lackluster representation of BEG’s prowess, I think that songs like “Boy” and “Recipe” revive some of the confidence and elegance of BEG that has always made the group a cut above the rest in maturity. They’re those smooth and creamy songs, complete with a just touch of acidity for depth and sass. “Recipe” in particular is wonderful both in execution and composition, and well deserved of its position as the pre-release track.

My one sentence perception of this album?

So what are your perceptions of Black Box? Does it live up to your expectations? Does it represent BEG, or succumb to inferior tastes? How do you think Black Box affects the trajectory of BEG’s musical development?

Let me know your answers to those questions and other thoughts in the comments!