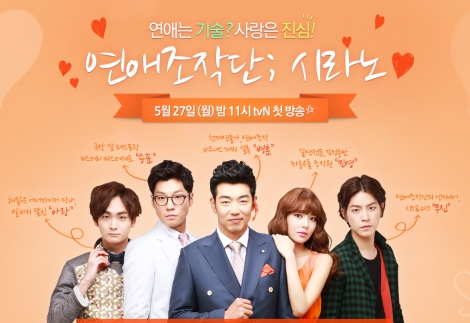 I tend to avoid idol actors like the plague, because they are more often than not less than engaging as their characters.  I made the fortunate decision to avoid SNSD as much as possible so far in dramaland because SM tends to not put out the best of idol actors, unless you want to count Yoochun—who we all know is not part of SM anymore. I knew of Dating Agency: Cyrano well before it aired because of Sooyoung‘s role, and had initially planned to avoid the drama altogether. I had no knowledge of her acting ability, but if it was anything like Yoona‘s, Jessica‘s, and Yuri‘s, I knew I’d be out of that mess before anyone could say “So Nyeo Shi Dae.” 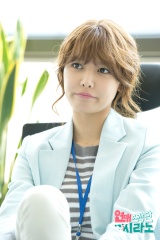 I ended up giving Cyrano a chance because I was totally sageuked out, even stopping Cruel Palace (for now) because I had lost all willpower to watch more palace antics. I took a look at the first episode of Cyrano out of curiosity, and lo and behold, Sooyoung did really well! She’s a complete revelation after the embarrassing failures of her group mates, as I found her to be quirky and endearing. Her character isn’t something that will be etched in our hearts for eternity, but she is well worth watching. In fact, the whole show is zippy fun all the time, and doesn’t waste a second of our attention. By the end of episode two, I was reaching out for episode three before realizing that it didn’t exist, and that I had to wait for an entire week to get what I wanted.

What makes this rom-com stand out so far, minus the obvious breath of fresh air in genre, is how forward moving it is, especially with the approximately two episode mini-arches within the drama.  A lot rom-coms start with a lull, trying to manufacture ways to get the main couple in each other’s presence in ways that can often defy logic. Here, the “OTP” meet instantaneously (like within the first 10 minutes) in a manner that’s necessary and progressive to the plot. How they meet actually establishes the premise of the entire drama, which is the growth and development of two characters that have very different approaches to romance. The very genuine interactions between the two leads actually provides a decent contrast to the staging that goes on within premise of Cyrano Dating Agency itself. 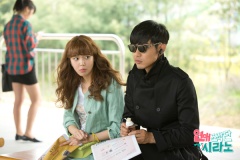 Another benefit to Cyrano is the de-emphasis of the fact that the characters are older. Many rom-coms tend to either have people in their twenties at its focal point, or the drama adds older characters to the mix and keeps reminding the viewer that X character or Y character is older. I don’t think it should be a big deal that the main characters are around thirty years old, and that doesn’t automatically mean that one half of the relationship should be much younger than the other. I appreciate how Sooyoung’s Min Young is nearly thirty, but doesn’t get pulled into a noona relationship or is constantly reminded that she’s old and a bachelorette. She may be naive, but she’s not stupid; she is idealistic, but not unperceptive. Most importantly, she learns from the people around her, and that’s where Seo Byung Hoon comes in.

I have to say, Lee Jong Hyuk is killing his role as Byung Hoon so far, because he exudes the older man charm, effortlessly conveys Byung Hoon’s pragmatism, and doesn’t come off as a jerk. All Byung Hoon really lacks is a real heart, which makes Byung Hoon a likable character. (Another way to put it is that Byung Hoon is a much improved version of Dokko Jin from Best Love.) As to how he’s going to get his heart back is probably pretty easy to find out, because all things aside, this is a rom-com. Cyrano may stretch the boundaries a bit, but it doesn’t stray too far from all the tropes we’ve come to know and love. (As long as there are no piggy-back rides, I’m a happy camper.)

Second lead Lee Chun Hee (as Cha Seung Pyo) is enjoyable to watch as well, because he’s as effortless as Lee Jong Hyuk.  Though Seung Pyo is not all that innovative as a second lead, he does keep things real and grounded. He’s not a prince character that comes to the female lead’s every beck and call in the way we normally encounter. Rather, Seung Pyo just seems to be intrigued by Min Young, as evidenced by the scene in which they meet (i.e. not enfatuated with her). In the scene where Seung Pyo receives a swiss knife from Min Young, he doesn’t seem affected by the gesture nor does he break from his role as a restaurant owner. So far, it seems that Seung Pyo is mostly minding his own business, though it is clear that Byung Hoon and Seung Pyo have had some not so great shared history and there’s some set up for the ever popular love triangle as well, sort of.

Regardless, the two main guys are fun to watch, plus their chemistry with Sooyoung is surprisingly good.  Like my OTP alarm went off immediately kind of good. As to which side of the aisle I end up on at the end of all of this, I’m leaning Byung Hoon.  I love how unaffected he is by Min Young when they have to get their work done, though he does have his moments of questioning littered here and there. Basically, what I was trying to get at is that I like how “THIS IS THE OTP GUYS” isn’t shoved down our throats and that Byung Hoon will end up liking Min Young based on who she is and her value system as opposed to some pheromone related attraction. This is especially evident (Spoiler) when he fires Min Young on reasonable grounds and actively teaches her the tricks of the trade like a true mentor.

All in all, I’m pretty excited about where Cyrano looks to go, as a lighthearted drama with a tad bit of depth and character. Then again, I wouldn’t really expect anything less from the Director/Writer, double punch of quality behind the drama.

(For the Shinee fans around here, who’s excited for Tae-man next episode? I think he will be hilariously awkward, but magically endearing.) 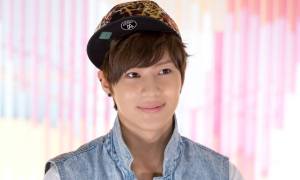